What’s the best way to keep from contracting an illness? Avoid exposure. Well yeah, you didn’t need us to tell you that. In the nursing world, that can be a bit more of a challenge than it is for the rest of us. And for hospitals, a nurse taking a sick day can create a domino effect within the facility’s infrastructure. On the other hand, if nurses go to work while sick, it could be detrimental to patients. Most nurses have flu shots each year in an effort to avoid sick time. They are also very aware that working while ill can compromise patients and other staff members.

Most of the time, nurses are required to work on a tight schedule, it’s just part of the job. One nurse calling in sick could mean the rest of the staff is taxed with extra work. It poses scheduling issues and, in the height of a heavy flu season, can mean there are simply not enough nurses to adequately meet patient needs. 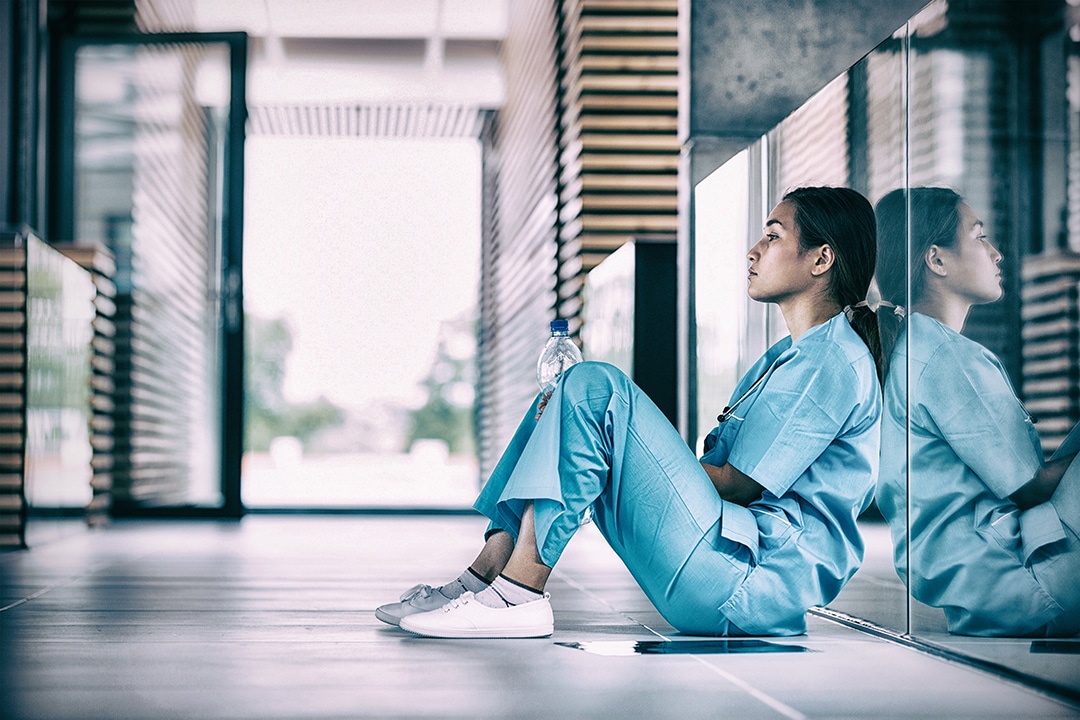 Some nurses may feel pressured to stay at work even when they are sick.

Sick leave can be a catch-22 for nursing staff. On one hand, it’s common sense that sick employees risk spreading their illness to other staff members. Not only that, but when staff members work with patients who have immunological weaknesses, the danger is compounded.

Customarily, most hospital policies treat calling in sick as a kind of “penalty.” Not because they are trying to be mean, but because it’s just policy. There might be rules in place to deduct points or count against a nurse who calls in too close to their next shift. The reality is that the flu (for example) often presents itself with as little as 24 hours’ notice. On a personal level, many nurses don’t want to be deducted points, use vacation days, or possibly lose a day’s pay due to illness, especially if they feel like they can power through it.

Other staff members can run into obstacles with taking sick time, as well. Surgeons, for instance, shouldn’t be operating while ill for obvious reasons. But taking the day off as a surgeon means canceling and rescheduling surgeries, which can push their schedule and the hospital schedule back days or even weeks.

It becomes dangerous when at some hospitals, it’s almost an unwritten idea that the staff should work through illness. We get it—hospital staff is made up of team members who count on each other in high-stress situations. Their first thought is often to be dependable and not let the rest of their team down. Unfortunately, it means it isn’t uncommon for nurses and other staff members to come in when they’re sick.

Setting policy to discourage taking sick leave can run the risk of passing infections on to patients. Additionally, staff who are sick at work are often are far less productive and are more prone to making mistakes.

So how can this sticky situation be solved? By attacking the root of the problem: contracting the illness in the first place. In other words, the ideal should be reducing sick time by reducing the instances of illness, not in encouraging staff to come in while ill.

Measures Hospitals Can Take to Reduce Illness Among Staff

Most hospitals mandate vaccines, which is one step to keeping staff as healthy as possible. However, it’s common knowledge that yearly flu shots don’t always cover every possible strain that might come into play in the season (we certainly saw that this past season, didn’t we?). We also know that a healthy lifestyle reduces the risk of picking up infections because it boosts the immune system.

Staff should be encouraged to live healthy lifestyles. This could include benefits such as a gym membership or access to a local gym, aid with quitting bad habits such as smoking, and even simple methods of de-stressing, such as allowing a few minutes to stretch outside every few hours.

Proper protocols with washing and disinfecting should always be a high priority. Cross-contamination is a significant risk in all hospitals. Consider how many machines, devices, keyboards and other surfaces are touched by multiple staff members, patients and visitors. No one can possibly wash your hands enough to remove all potential cross-contamination points. Ultraviolet light has been proven to be the most effective method of sanitization. It is fast, kills much more bacteria than methods like chemicals and doesn’t require getting devices and electronics wet to get them clean.

With the correct use of ultraviolet light on high-touch surfaces, staff sick time has the potential to be greatly reduced. Effective sanitization can increase the effectiveness of healthcare workers, prevent last-minute rescheduling and provide a safer place for all parties who enter the hospital.